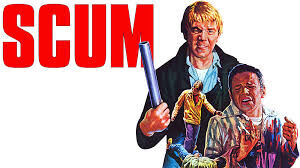 SCUM 1979 WIKI is a database on the British film Scum, written by Roy Minton and directed by Alan Clarke, about life and survival within the walls of a brutal 1970s borstal.

Detailed information on characters, actors, the director, the screenwriter, filming locations, borstal language & ethics and Blu-ray, DVD and home video releases are all included within this Wiki.

Disclaimer: Scum 1979 Wiki is purely a fansite database, a 100% non-profit making tribute to the film, screenplay and it's cast, writer, director, producers and crew. No copyright infringement is intended on any images, information or media used on this site. All cast interviews published here have the artist's approval.

Community content is available under CC-BY-SA unless otherwise noted.
Advertisement